For 16 years, RVIA has fielded a diverse group of spokespeople to meet with local media and talk about the advantages of RV travel. RVIA spokespeople have been interviewed in cities and towns across the , including , , and . Spokespeople have occasionally enjoyed the national spotlight in such important media outlets as NBC Today, CBS Sunday Morning, Today, Fox Network News, People, HGTV, History Channel and the Travel Channel.

Here is an introduction to this year’s media spokespersons.

Professional bowler Walter Ray Williams has won more titles and earned more money than any player in the history of professional bowling. He has won 42 titles on the PBA tour and earned more than $4 million during his brilliant 21-year career. He credits traveling in his motorhome from tournament to tournament for the past 16 years as having a positive impact on both his game and his family life.

He is promoting RVing in media interviews during stops of the Professional Bowlers Association (PBA) tour on ESPN from February to April.

Carol and Phil White had always dreamed of seeing the by RV, so they bought a Type B motorhome and toured the continental in 2004. They learned so much about road trips that they published a travel book called Live Your Road Trip Dream. The book contains step-by-step information on planning the perfect road trip.

The Whites are an active empty nester couple who will appeal to the huge baby boomer market. They will promote the fun and freedom of RV travel in media appearances this September, starting with an appearance at the annual AARP convention in from September 6-8.

David Woodworth, noted RV historian, will begin his 16th National RV History Tour for RVIA this spring. Over the years he has reached millions of Americans with his message about ’s love affair with RVing and the open road. The 2007 tour will also promote the new RV/MH Museum in , which recently acquired Woodworth’s valuable collection of antique RVs.

Brad and Amy Herzog are quintessential Generation Xers, who travel by RV with their two young sons Luke, 6 and Jesse, 5. Inspired by his family RV travels, Brad has published several travel books including the acclaimed States of Mind and Small World.

Starting in June, the Herzogs will begin their eighth media tour for RVIA. Once again, they will be delivering their message that RVs are the most affordable, hassle-free way for young families to travel. Like all RVIA spokespersons, they also promote GoRVing.com as the best place to go for information on RVing.

“With a pro athlete, active empty nesters, a Generation X family and an RV historian, RVIA spokespeople will reach a wider spectrum of the population than ever before with appealing messages,” said , RVIA’s vice president of public relations and advertising.

RVIA (rvia.org) is the national association representing 500 manufacturers and component suppliers producing approximately 98 percent of all RVs made in the .

Editor’s Note: Photos of Walter Ray Williams, David Woodworth and Brad and Amy Herzog can be obtained by contacting Kevin Broom at x304 or kbroom@rvia.org.

Posted by Carol White - The Road Trip Dreamer at 9:15 PM No comments:

The Qi of China It is 8:30 am on a brisk Saturday morning in November and we are walking through a city park on our way to The Temple of Heaven in Beijing. Even at this hour, throngs of people are out enjoying the day: dancing, singing, laughing, playing instruments, reading, and exercising. The energy everywhere we look is amazing, especially since most of the people are seniors. A couple in their seventies or more catches my eye. They have obviously danced together forever. They are floating to the music, totally unaware of others around them. A darling old man is sitting on a wall with his purple crocheted cap. He is hard at work on his next crocheted item and enjoying the detail of his work.
To read the complete article, go to: http://www.perceptivetravel.com/issues/0307/white. html

In November, Phil and I had the opportunity to travel to the mysterious, wonderful country of China. This month, Perceptive Travel has included an article we wrote about the experience in their online Magazine. We hope you enjoy it.
Posted by Carol White - The Road Trip Dreamer at 4:10 PM No comments: 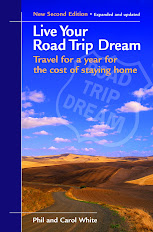 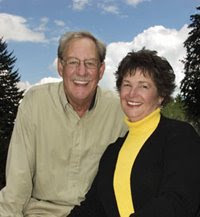